About me Intercom Teambit Solaris

Description: An astronomy calendar of celestial events (meteor showers, eclipses or conjunctions) happening over your head. 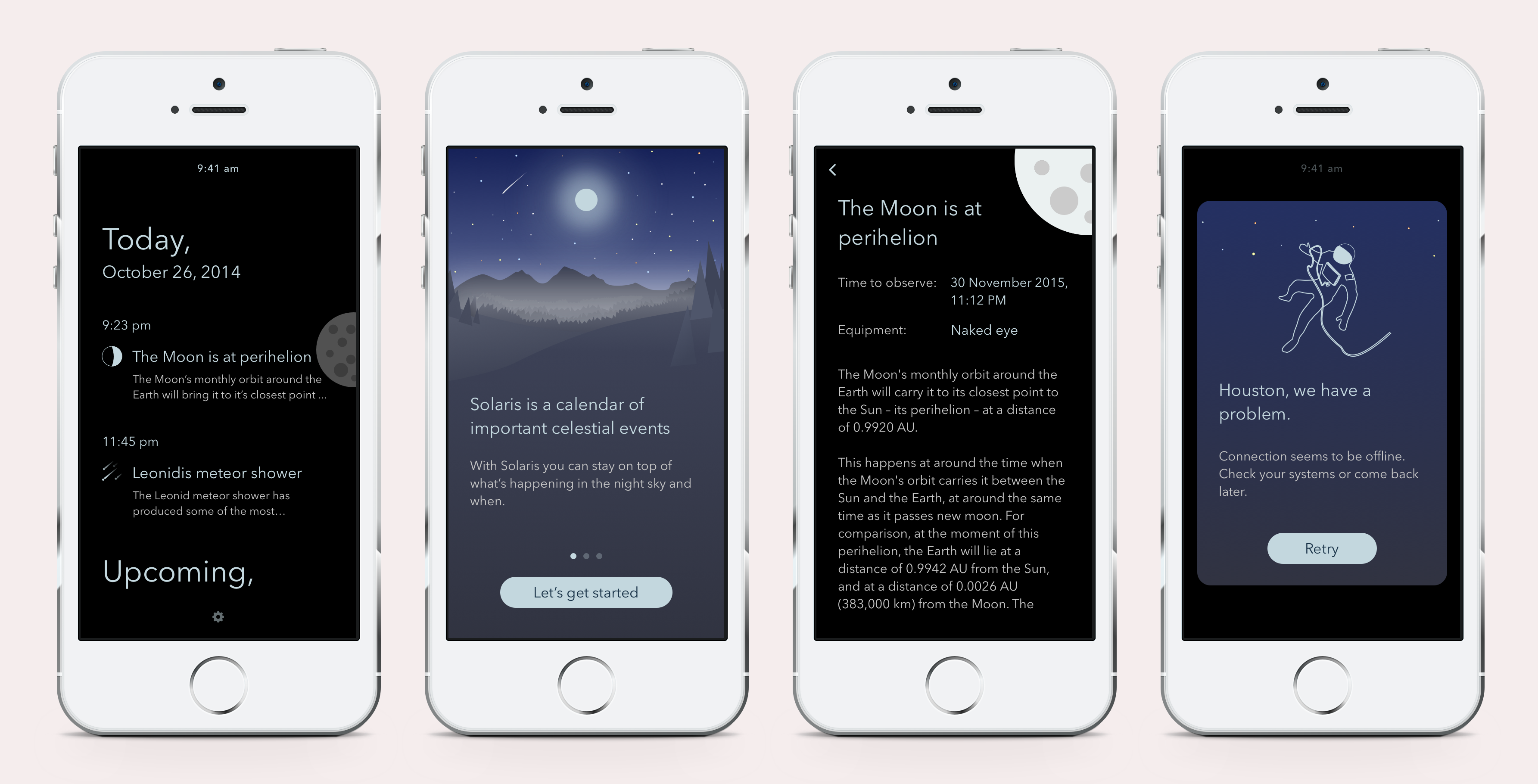 Following the passion
Having been interested in astronomy for the majority of my teen years, in the autumn of 2014 I decided to share that passion with others.

I started by curating a weekly newsletter for people curious about astronomy, covering topics from how to get satellites to geostationary orbit to what Hawking radiation is.

As the number of subscribers grew over a thousand, I tried to understand them better. Curiously, even though many of them considered themselves amateur astronomers, they have hardly ever done actual skywatching due to a lack of knowledge about upcoming celestial events.

This seemed like an interesting opportunity for a passion project and so I jumped into it.

Exploring solutions
By running polls and quick interviews, I was able to understand what data people need (time, coordinates, descriptions, etc) and what their workflows are like. Based on that I formulated the jobs an app would do and explored its layout and IA. 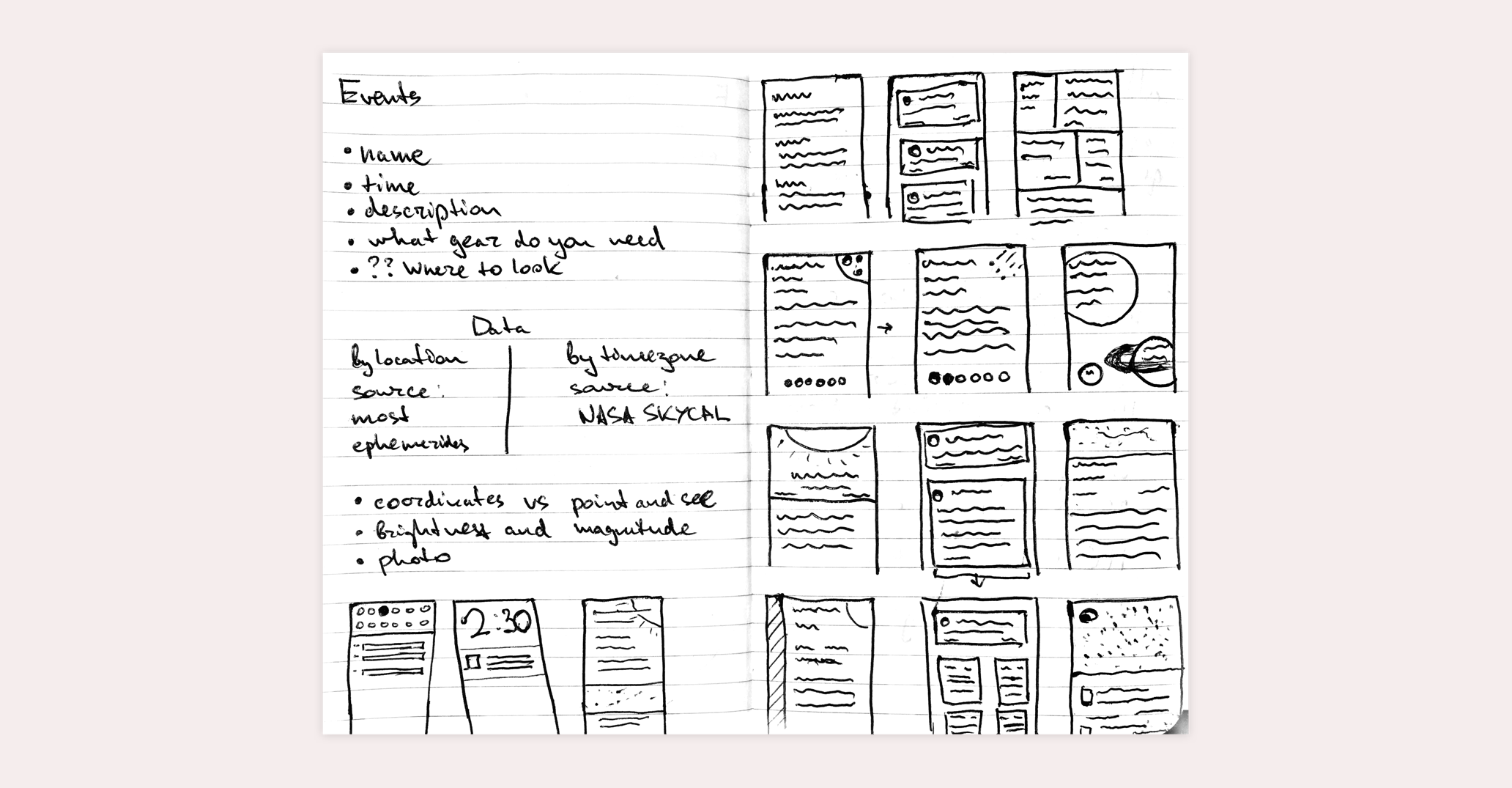 Some of those early sketches

Doing design and engineering (especially with my measly Swift skills) in parallel, while working on Solaris for just a few hours a week felt overwhelming, so I ended up bringing one of my teammates from a previous startup, as a technical co-founder.

Making it real
After a few iterations, we’ve ended up focusing the app around celestial events, presented in a simple chronological timeline. 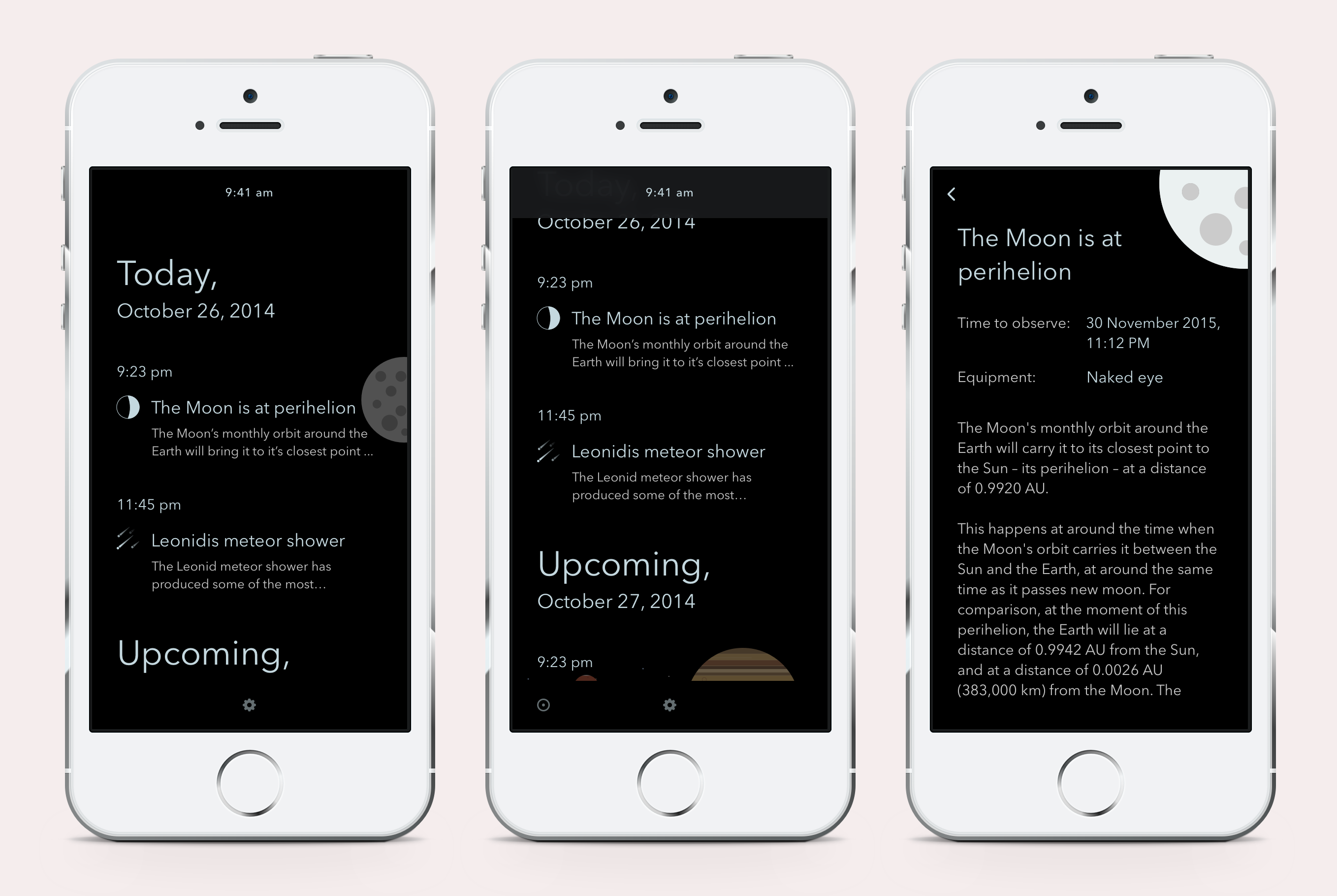 We were conscious that Solaris won’t be an app for daily use. Thus we’ve made an effort to ensure people could customise which types of events they would like to see and be notified about. 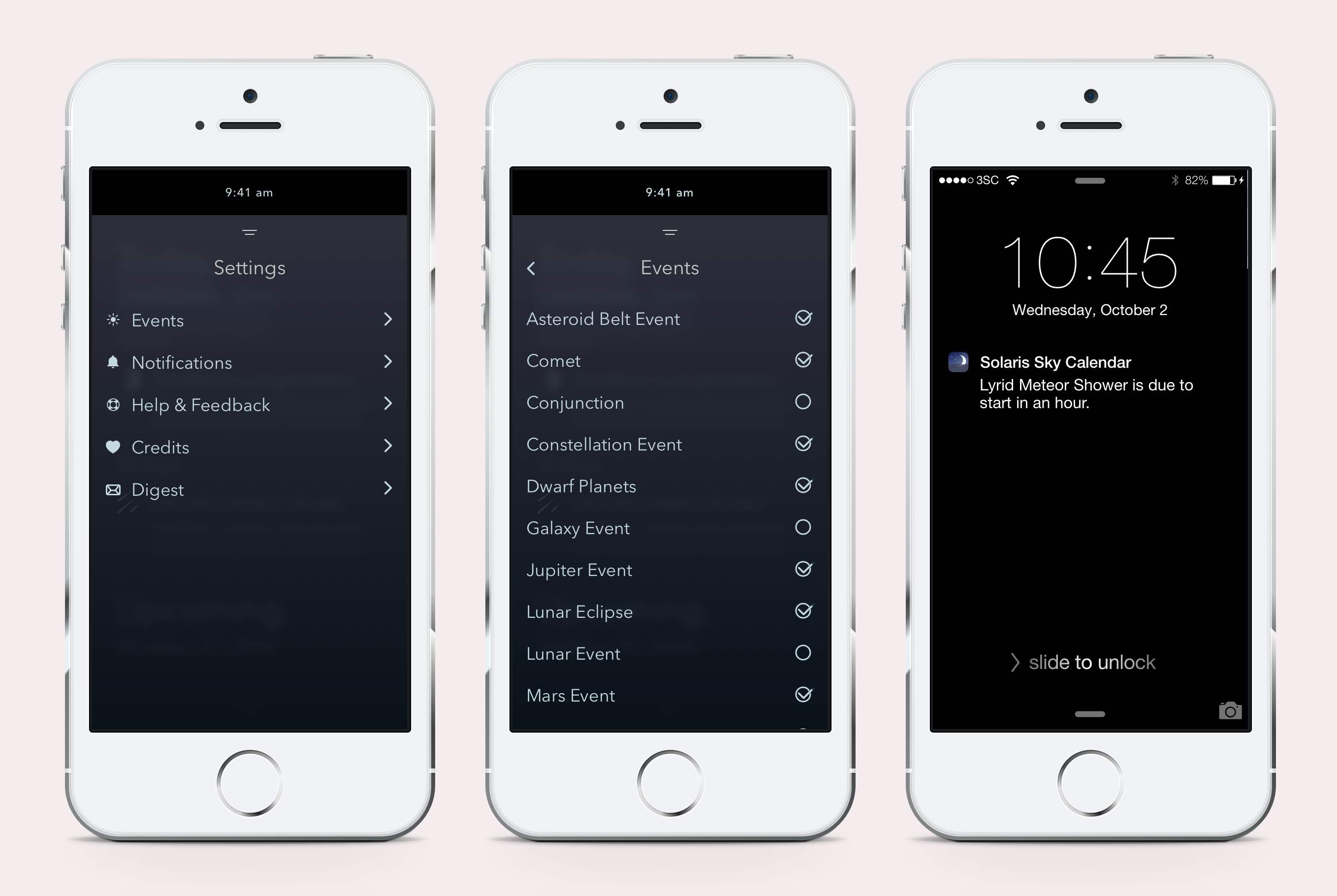 To that end, we also wanted for an app to trigger an emotional response. And so we've put extra attention in order to create a feeling of excitement: in the app’s starting animation, …

…in its onboarding experience, … 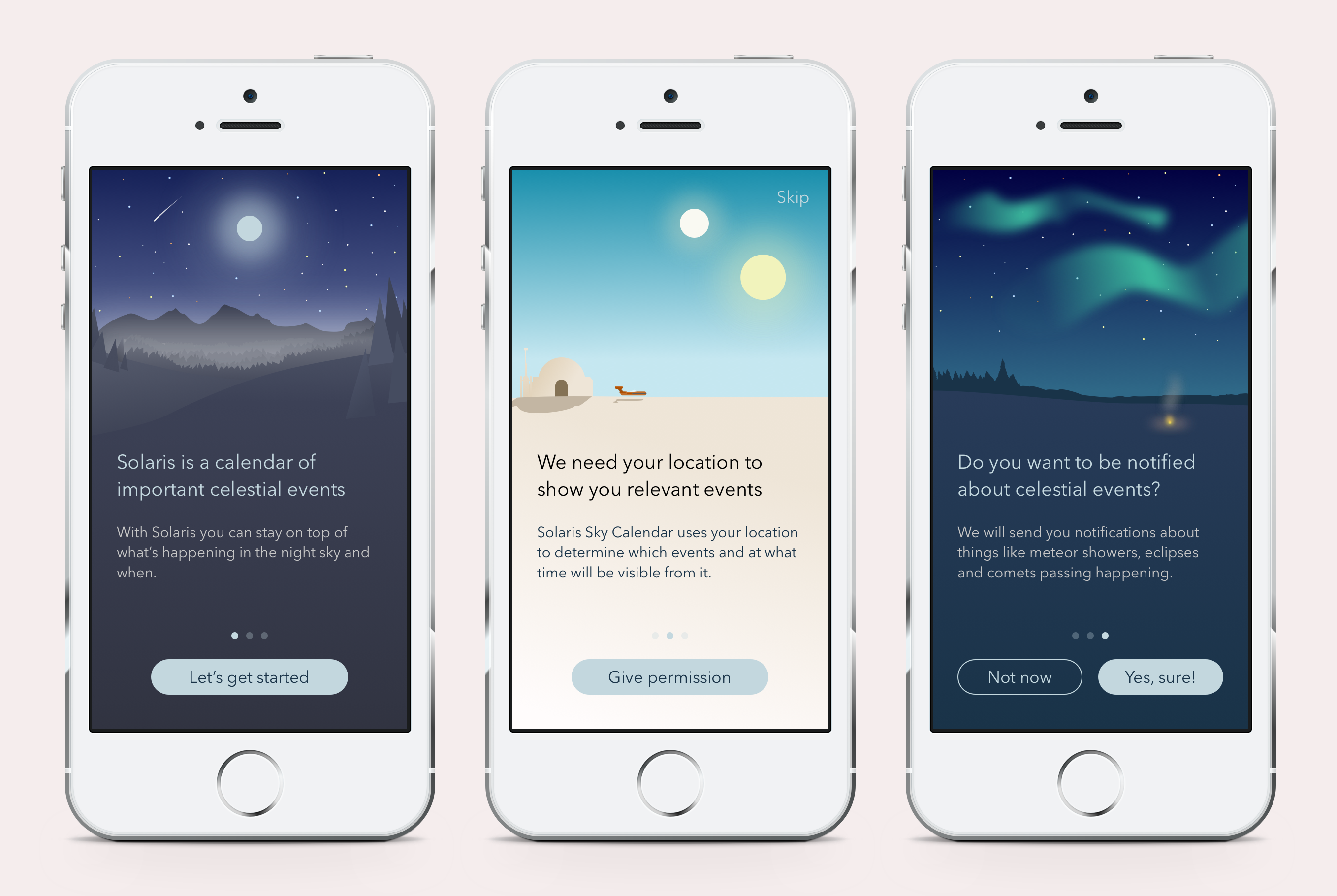 …as well as in the handling of edge cases and introduction of easter eggs (if people were able to find those easter eggs, for example, by clicking on a particular place or by pulling hard, certain extra functionality would unlock). 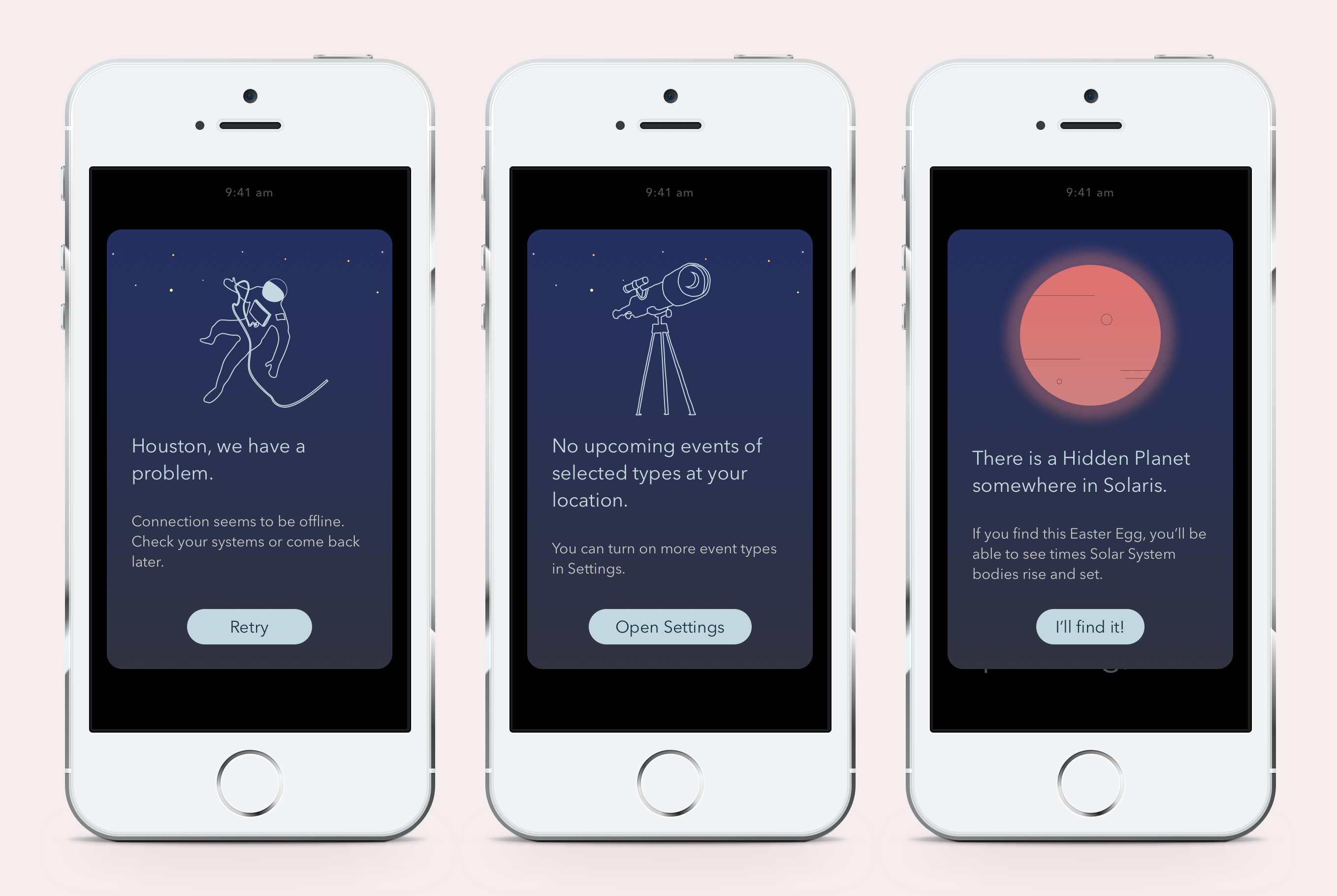 Going live and moving on
We launched Solaris Sky Calendar in April of 2016, getting some coverage in the media ( 1 / 2) and lots of positive reviews and feedback.

Some of the feedback our users shared

And that's ultimately what a not-even-the-main side project could ever hope to have.